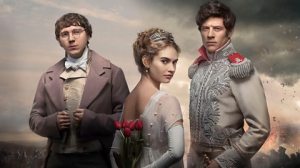 Bina007, Stuart (Firenzed) and Imogen.OB discuss, in various permutations, Tolstoy’s epic tale of love amidst the Russian aristocracy during the Napoleonic wars.

To start, Bina007 & Firenzed cover the major story arcs of the mini-series, the depiction of war and other adaptations of the novel. Then at 1hr 7mins, Bina007 & Imogen.OB get into an in-depth discussion of the novel and the mini-series. Finally, the aftershow begins at 1hr 58mins and includes:  Intro to Firenzed, ASOIAF and Chekhov Wildfire; plug for Cockneymoot on May 1st at Blenheim Palace; a lot of Sega/Creative Assembly Empire and Napoleonic Total War chat; our thoughts on Napoleon more generally.

Contains spoilers for the the novel, its adaptations, and Napoleonic history, if such a thing is possible, as well as occasional references to A Song of Ice and Fire.

Music: Tchaikovsky’s 1812 Overture. This was also composed, like War and Peace, many decades after the battle of Borodino to commemorate Russia seeing of the perfidious French invasion.